On May 18th, 2021, Philadelphia District Attorney Larry Krasner fended off a democratic primary challenge from Carlos Vega, a former assistant district attorney who Krasner fired when he took office in 2018. This means that Krasner, whose first term is the subject of the eight-part Philly D.A. docuseries on Independent Lens, will almost certainly win a second term in November’s general election.

The primary race was hotly contested and closely followed, for all the reasons at the dramatic heart of the docuseries: debates over cash bail, parole, and sentencing; battles between police unions and reform advocates; spikes in violent crime; ongoing police violence; and the legacy of systemic racism. As Time Magazine noted in its Philly D.A. review, the story of Krasner and his team demonstrates that “in the context of a deeply flawed criminal justice system, radical change is at once totally possible and extremely difficult.”

The primary election gives us a strong sense of what people in Philadelphia think about Krasner and the “progressive prosecutor” case for reducing mass incarceration and holding police departments accountable. But what do people watching Philly D.A. in other parts of the country think about these ideas? What are their takeaways from the docuseries?

Independent Lens partnered with Fair and Just Prosecution, other criminal legal reform organizations, and local public media stations to bring together community members to watch the series, learn about the criminal legal system, and discuss the issues. From March to mid-May, more than 3,200 attendees joined 60+ virtual civic engagement events across the country. Philly D.A. engagements, which are part of the Independent Lens Stories for Justice partnership with PBS, will continue through fall 2021.

Event participants and other viewers were invited to share their perspectives on Philly D.A. and the criminal legal system with each other on DocSCALE, an interactive feedback platform. To date, more than 750 individuals have done so.

Event participants have included individuals personally impacted by incarceration (19 percent) and those who work for the criminal legal system or that do related social justice work (29 percent). Individuals newer to the issues also joined the discussion: 40 percent of participants indicated they didn’t know who their local prosecutor was.

Almost all participants indicated that they learned something from watching and discussing Philly D.A.. Around three quarters of participants learned about reform efforts in the criminal legal system and more than half learned about the role of prosecutors, factors that led to mass incarceration, and/or racial inequities in the system.

For many participants, this was the tip of the iceberg. Realizing just how little they knew about the criminal legal system, participants committed to learning more. As one viewer who works in a local prosecutor’s office noted: “Even if you think you know everything about our judicial system, you are in for a rude (and necessary) awakening. This show should be required watching.”

Most frequently, participants indicated that they planned to learn more about their local prosecutor and pay closer attention in the next election.

Many participants wanted to understand more about how the system worked in their local community. As a participant from Seattle, Washington indicated: “I had no idea about the bail system. I will find out whether my city has the same system. If so, I will write to elected representatives [about it.]” Another participant from Crossville, Tennessee shared that she “wants to know more about our local probation and parole practices. It seems...many [people] get caught up in violations of their conditions and have to pay a lot of money in fines and fees...I doubt they have the money for those fines.”

A smaller but still sizable group of participants wanted to dig deeper into systemic issues, but noted that they were unsure where to find the needed information. Calling for increased transparency, one participant from Chicago, Illinois, planned to “ask their prosecutor's office to explain their goals in detailed metrics and to report on their progress [towards goals].”  Another participant from Alpharetta, Georgia called on “the media to look at and determine if there is a close connection between bail bond business and political contributions.”

Equipped with new knowledge and inspired by the series and discussion, lots of participants outlined new or renewed support for criminal legal reforms. Participants expressed the strongest support for ending cash bail, a focus for the first episode of Philly D.A. Many participants also outlined plans to support police reform.

Still, other participants expressed hesitancy about reforms and called for more information on their impact. As one viewer added, we need to “advocate for reforms that are data-driven and people-focused, not just the way it's always been done or based on the public's perception of what will fix crime.”

As the virtual Philly D.A. discussion continues to unfold and evolve on DocSCALE, two things are already clear: 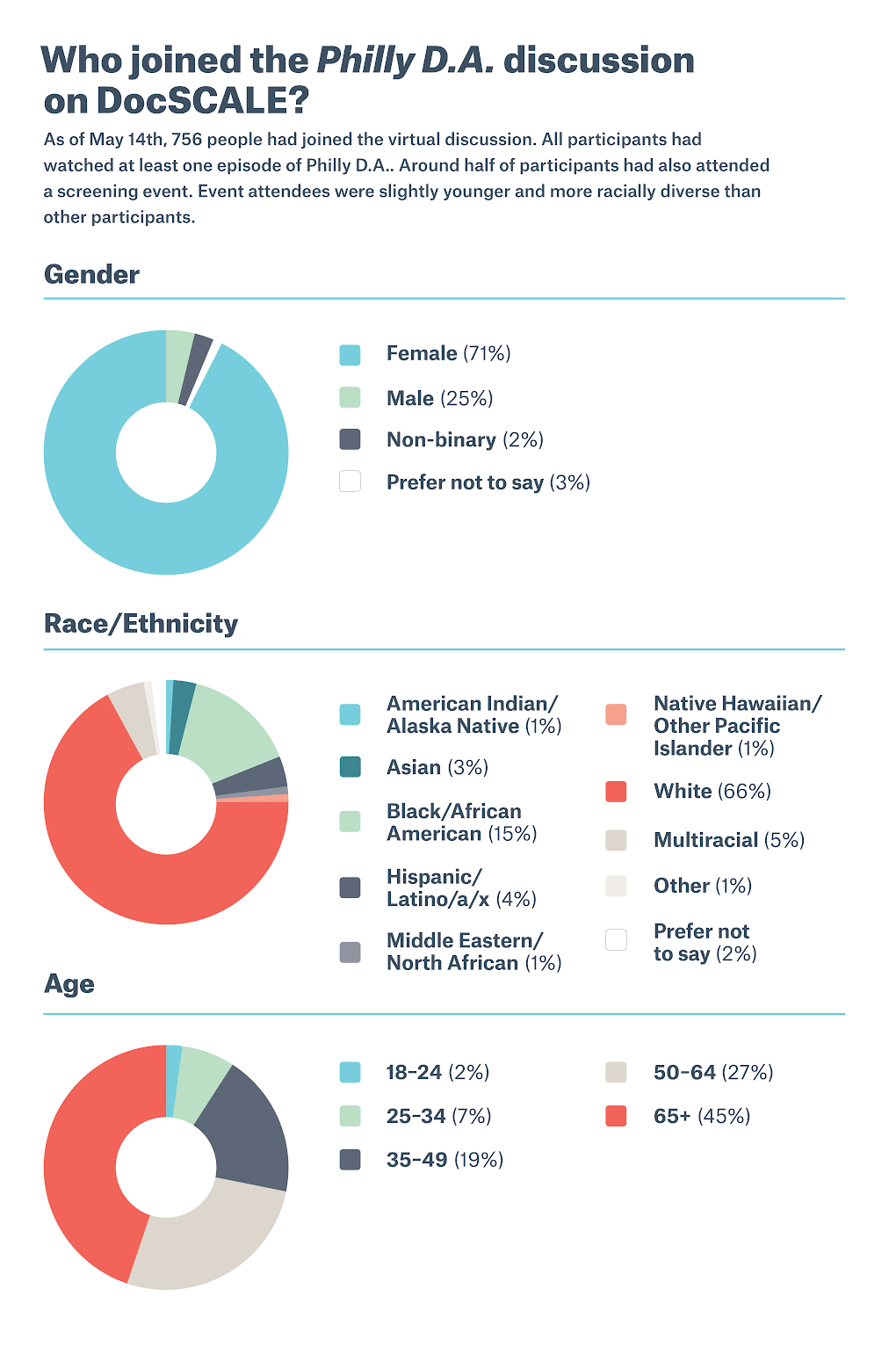